June 10th 2011. That was one of those days you never want to see. It was the day our Maria left us after along battle with cancer. To say she is much missed doesn’t come close. Along with what she meant to her family and friends, she was the very heart of Geoffs Bar in Waterford city for over a quarter of a century and Geoffs was at the heart of many of our lives. Now the heart has gone.

She knew this bar inside and out, scrubbed its floors, rolled cigarettes on its counters, stopped to chat in Protestants corner, served tea (millions of mugs to me alone-thank you), food, beer, smiles (that lovely smile), help, advice and fond-or not-so-fond if you were not in her good books-invective over the deep-grained, wooden counters to the hundreds, even thousands of us who were lucky enough to be a part of her extended family but who were bold enough not to eat their salad…

I used to sit with a mug of tea and draw…and draw….and draw. I wasn’t, to my regret, very good at people so there are no drawings of Maria (I did attempt John Fitz, our other treasure) but she was always there so I think in one way or another she is here, in all of these pictures. She used to simultaneously berate and encourage  me.

“If I had your talent girl I’d be long gone out of here.”

But I think we are glad she stayed. I think she was too.

I guess I wasn’t close to Maria in the sense I didn’t spend a lot of time with her. She had her gang, her close friends, her good friends, who were with her until the end. But it would also feel odd for me to say we weren’t friends. Maria was more like family to most of us I suppose, always there, a rare constant,  her sunny, toothy smile as she put a tea on the counter before I had barely even walked in the door of Geoffs was a given.

Once on a crowded Saturday night, desperate for a drink to drown some awful and ridiculous calamity, I stood in the crush at the bar, miserably clutching a Southern Comfort when from the middle of the mayhem a hand appeared from over the counter, the back of it brushing my cheek even as the other hand was pulling a pint.

“Are you alright girl?” 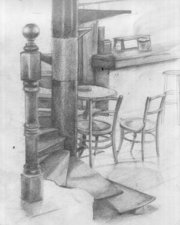 At least half of Waterford turned up at the church to say goodbye to Maria (and sure the other half aren’t worth bothering with). She organised the service herself in the week before she died, the pain pushed aside by her powerful will to shoulder all burdens, her no nonsense attitude, her aversion to wallowing-she never had time for that shite. She kept moving forward. Her only concern to the very last was in making sure everyone else was OK.

She still is, and always will be, terribly missed by those who were lucky enough to know her. And she is an absence in the lives of those who have come after, who never knew her, whether they know it or not. But we know. There was only one Maria Gaffney.

Thinking of you today girl.

To the waters and the wild

With a faery, hand in hand.

For the world’s more full of weeping

than you can understand.

A while ago I visited an old colleague. Before I left he invited me into his garden. The patio area was swept and clean, the grass was mown and all the plants well tended. In a brick planter he had some garlic growing, their stalks reaching up to the sky in regular rows. Would that I could keep my few unruly pots so tidy! He pulled a bulb from the earth for me, carefully winding a plastic bag around it so that I wouldn’t get soil in my car.

It sat in my fridge for a few weeks. When I finally took it out, still mosaiced with earth, one of the cloves – streaked magenta under the clinging scabs of soil – had pushed out a pale green sprout and the stalks were yellow green, crinkled and crisp. I was reluctant to break it not just because of my fondness for the giver but because of its richness and the character and life that seemed to burst from it. I decided to plant the cloves and grow my own neat (unruly) rows of garlic. But first I drew it, its earthy fecundity and tangled stalkiness putting its anaemic, clipped supermarket cousins to shame.

I thought of him while I sketched. We had planned a coffee with him, another colleague and myself, and as I drew the garlic clove, I thought of telling him about my new, tiny, neat (unruly) garden in waiting. I would organise it soon, that coffee. Maybe tomorrow…

But tomorrow never came. Only days later the news arrived and I knew that whoever would be easing the remaining bulbs of garlic from their earthy bed, it would not be him. And the garden remains in waiting. Rest well Nigel. You were more precious than I knew.